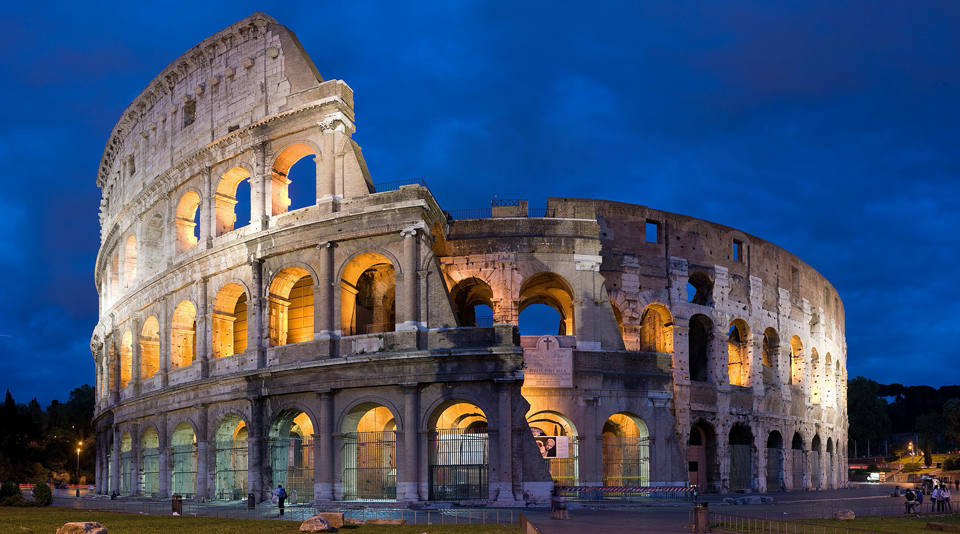 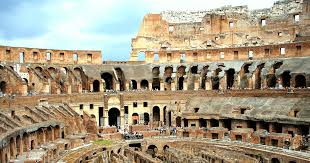 Measuring some 620 by 513 feet (190 by 155 meters), the Colosseum was the largest amphitheater in the Roman world. Unlike many earlier amphitheater, which had been dug into hillsides to provide adequate support, the Colosseum was a freestanding structure made of stone and concrete. The distinctive exterior had three stories of arched entrances–a total of around 80–supported by semi-circular columns. Each story contained columns of a different order (or style): At the bottom were columns of the relatively simple Doric order, followed by Ionic and topped by the ornate Corinthian order. Located just near the main entrance to the Colosseum was the Arch of Constantine, built in A.D. 315 in honor of Constantine I’s victory over Maxentius at Pons Milvius. Inside, the Colosseum had seating for more than 50,000 spectators, who may have been arranged according to social ranking but were most likely packed into the space like sardines in a can (judging by evidence from the seating at other Roman amphitheaters). Awnings were unfurled from the top story in order to protect the audience from the hot Roman sun as they watched gladiatorial combats, hunts, wild animal fights and larger combats such as mock naval engagements (for which the arena was flooded with water) put on at great expense. The vast majority of the combatants who fought in front of Colosseum audiences in Ancient Rome were men (though there were some female gladiators). Gladiators were generally slaves, condemned criminals or prisoners of war.

The Colosseum saw some four centuries of active use, until the struggles of the Western Roman Empire and the gradual change in public tastes put an end to gladiatorial combats and other large public entertainments by the 6th century A.D. Even by that time, the arena had suffered damaged due to natural phenomena such as lightning and earthquakes. In the centuries to come, the Colosseum was abandoned completely, and used as a quarry for numerous building projects, including the cathedrals of St. Peter and St. John Lateran, the Palazzo Venezia and defense fortifications along the Tiber River. Beginning in the 18th century, however, various popes sought to conserve the arena as a sacred Christian site, though it is in fact uncertain whether early Christian martyrs met their fate in the Colosseum, as has been speculated.