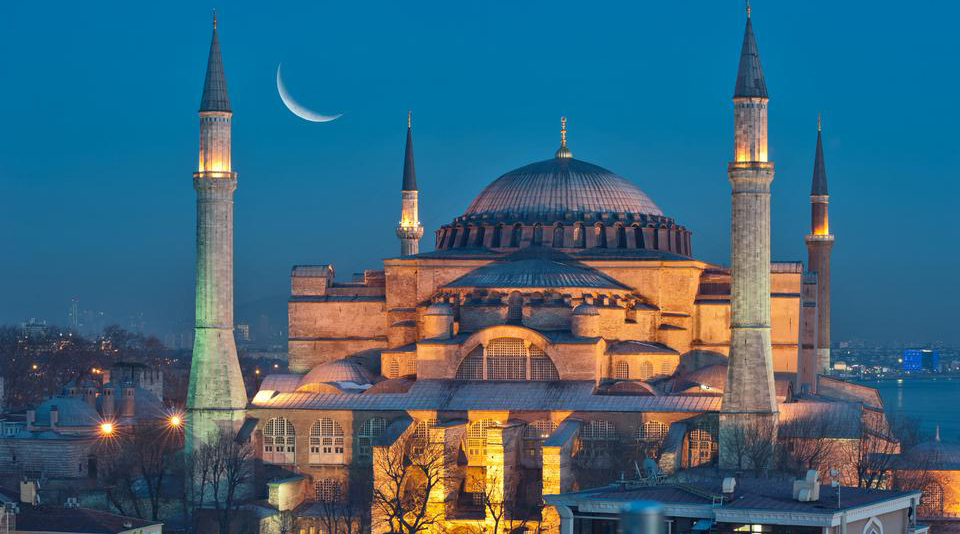 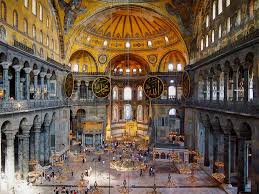 
Hagia Sophia is an enormous architectural marvel in Istanbul, Turkey, that was originally built as a Christian basilica nearly 1,500 years ago. Much like the Eiffel Tower in Paris or the Parthenon in Athens, the Hagia Sophia is a long-enduring symbol of the cosmopolitan city. However, as notable as the structure is itself, its role in the history of Istanbul—and, for that matter, the world—is also significant and touches upon matters related to international politics, religion, art and architecture.

From its opening, the third and final Hagia Sophia was indeed a remarkable structure. It combined the traditional design elements of an Orthodox basilica with a large, domed roof, and a semi-domed altar with two narthex (or “porches”). The dome’s supporting arches were covered with mosaics of six winged angels called hexapterygon. In an effort to create a grand basilica that represented all of the Byzantine Empire, Emperor Justinian decreed that all provinces under his rule send architectural pieces for use in its construction. The marble used for the floor and ceiling was produced in Anatolia (present-day eastern Turkey) and Syria, while other bricks (used in the walls and parts of the floor) came from as far away as North Africa. The interior of Hagia Sophia is lined with enormous marble slabs that are said to have been designed to imitate moving water. And, the Hagia Sophia’s 104 columns were imported from the Temple of Artemis in Ephesus, as well as from Egypt.

The building measures some 269 feet in length and 240 feet in width and, at its highest point, the domed roof stretches some 180 feet into the air. When the first dome suffered a partial collapse in 557, its replacement was designed by Isidore the Younger (the nephew of Isidoros, one of the original architects) with structural ribs and a more pronounced arc, and this version of the structure remains in place today. This central dome rests on a ring of windows and is supported by two semi-domes and two arched openings to create a large nave, the walls of which were originally lined with intricate Byzantine mosaics made from gold, silver, glass, terra cotta and colorful stones and portraying well-known scenes and figures from the Christian Gospels.