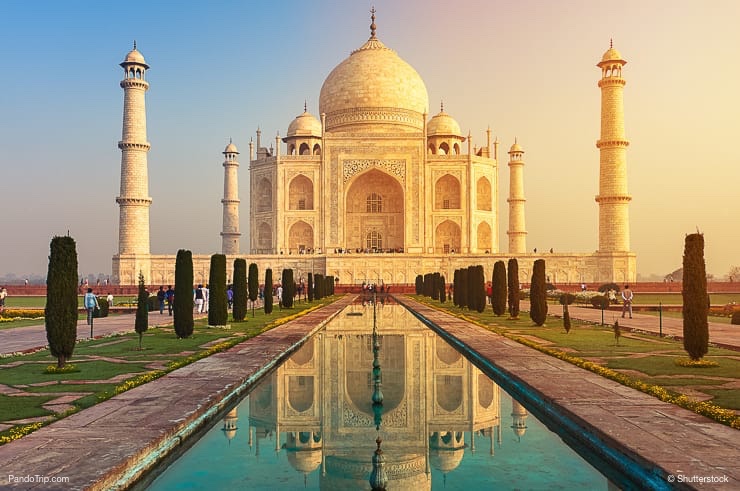 The Taj Mahal is an enormous mausoleum complex commissioned in 1632 by the Mughal emperor Shah Jahan to house the remains of his beloved wife. Constructed over a 20-year period on the southern bank of the Yamuna River in Agra, India, the famed complex is one of the most outstanding examples of Mughal architecture, which combined Indian, Persian and Islamic influences. At its center is the Taj Mahal itself, built of shimmering white marble that seems to change color depending on the daylight. Designated a UNESCO World Heritage site in 1983, it remains one of the world’s most celebrated structures and a stunning symbol of India’s rich history.

Named the Taj Mahal in honor of Mumtaz Mahal, the mausoleum was constructed of white marble inlaid with semi-precious stones (including jade, crystal, lapis lazuli, amethyst and turquoise) forming intricate designs in a technique known as pietra dura. Its central dome reaches a height of 240 feet (73 meters) and is surrounded by four smaller domes; four slender towers, or minarets, stood at the corners. In accordance with the traditions of Islam, verses from the Quran were inscribed in calligraphy on the arched entrances to the mausoleum, in addition to numerous other sections of the complex. Inside the mausoleum, an octagonal marble chamber adorned with carvings and semi-precious stones housed the cenotaph, or false tomb, of Mumtaz Mahal. The real sarcophagus containing her actual remains lay below, at garden level.The rest of the Taj Mahal complex included a main gateway of red sandstone and a square garden divided into quarters by long pools of water, as well as a red sandstone mosque and an identical building called a jawab (or “mirror”) directly across from the mosque. Traditional Mughal building practice would allow no future alterations to be made to the complex.